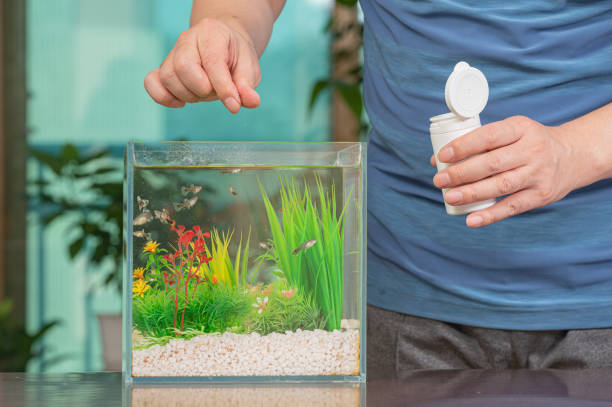 Looking for a beautiful centerpiece fish that is similar to a betta but isn’t as aggressive and plays well with other tank mates? The honey gourami is a great choice. Like betta fish, honey gouramis are brightly colored, make bubble nests to house their eggs, and have a special labyrinth organ that allows them to absorb oxygen directly from the air. Find out more about these peaceful nanofish and how to care for them.

What are Honey Gouramis?

Trichogaster Chuna is a Trichogaster from India and Bangladesh. It can be found in slow-moving, lush ponds. It is a great pet for beginners because it can withstand sudden changes in water chemistry due to the seasonal monsoon rainfalls. Like many gouramis, the honey gourami has a flat, oblong-shaped body with two modified ventral fins that act like long, trailing whiskers.

Is a honey gourami the same as a dwarf gourami? No, the dwarf gourami is a different species called Trichogaster lalius that grows to 3 inches (8 cm), whereas the honey gourami is smaller in size and stays around 2 inches (5 cm). While dwarf gouramis have a greater number of color varieties to choose from, their feisty nature means that they can be more prone to bullying other fish in the aquarium.

The most popular honey gouramis found in fish shops are yellow or gold types.

What kinds of honey gouramis do you have? Red, yellow gold and wild are the most popular. This latter type is sometimes called “sunset Honey Gourami”, but it is often confused with Trichogaster labiosa, which is a sunset thick-lipped. Thick-lipped gouramis can grow to as high as 3.5-4 inches (9-10 cm), so be sure to get the right species.

Why is my honey gourami turning black? They are mostly solid-colored, but the throat and belly of a male gourami can turn dark blue-black when courting a female.

How much does honey gouramis usually cost? It all depends on where you live and what color the gourami is.

How to Set Up an Aquarium for Honey Gouramis

As mentioned before, honey gouramis are used to living in a wide range of conditions, such as pH of 6.0-8.0, temperatures between 74-82degF (23-28degC), and soft to hard water hardness (or GH). A single honey gourami can live in a 5- or 10-gallon tank, but a group of three gouramis would do better in a 20-gallon aquarium. Honey gouramis live in sluggish waters, so use a filter with slower flow.

Are honey gouramis hostile? They are peaceful fish who get along with everyone. Honey gouramis can be shy if they have a semi-aggressive fish who establishes himself as the tank boss. Honey gouramis can sometimes fight, especially if there is a male protecting his territory during breeding. We’ve also witnessed a dominant female chase another female during mealtimes. To minimize minor quarreling, spread out the fish food and provide plenty of cover.

Can I keep a honey-gourami by itself? Both sexes are equally good-natured and can live alone or in a group. They do not like to be surrounded by other fish and will not swim together. If you keep a pair of them, make sure they have plenty of room and that one gourami is not dominating the other.

How can a honey gourami fish live with another fish? Their friendly personalities make it easy for them to get along with smaller fish in their community. Their classic yellow color really stands out in a lushly planted aquarium with schooling fish of a contrasting color, such as green neon tetras or blue neon rasboras (Sundadanio axelrodi ‘blue’). They can also be kept with bottom dwellers such cory catfish and rosy loaches. They have been kept with betta fish in the past, but this only worked if the betta wasn’t as aggressive. If they are not, be ready to separate them. Finally, although they don’t seem to be interested in adult amano and cherry shrimp, they will eat any babies that they find. For a gourami, Trichogaster chuna is very peaceful and easy to get along with.

What are Honey Gouramis’ Favorite Foods?

They eat small bugs larvae, crustaceans and other invertebrates, similar to bettafish. They don’t eat picky foods and will happily eat an omnivore diet consisting of flakes and nano pellets, Repashy food, frozen foods, frozen foods and freeze-dried food. While many labyrinth fish (or anabantoids) like to hang around the middle to top layers of the aquarium, we find that our honey gouramis swim all over the tank and readily eat both floating and sinking foods.

How to Breed Honey Gouramis

Honey gouramis can be fun to breed, especially if your experience with bubble nesters is limited. (And unlike betta fish breeding projects, there is no need to separate the juveniles into individual jars or containers because of aggression issues.) There are many different ways to breed honey gouramis, but the first step is to ensure you have at least one male and one female. The male goes more vividly than the female when it comes to sexing honey gouramis. His throat becomes dark blue-black during courtship. We prepared a 10-gallon aquarium with approximately 6-8 inches (15-20 cm) of water, a heater set to 82degF (28degC), and a gentle sponge filter with minimal surface agitation. Add plenty of floating plants like water sprite and water wisteria so the male has good places to anchor his bubble nest. Also, many hobbyists recommend sealing the aquarium lid with plastic wrap to increase the humidity and ensure proper labyrinth organ development in the babies.

To condition the honey gouramis for spawning, add a male and a female pair of honeyguramis to your breeding tank. After the male creates a suitable bubble nest and courts his female, the male will approach the female repeatedly and pick up the eggs with his mouth before carefully placing them into the bubble nest. He will chase down any mother or child who might be in the way of his eggs and guard them fiercely.

The temperature of the tank can determine the time it takes for eggs to hatch. Fry may become free-swimming after 1-2 days. It is safe to remove the father as well once the babies have left the bubble nest. Although honey gouramis can lay many eggs, there is a high rate of fry mortality within the first two weeks. The babies are very tiny and require constant access to miniscule foods like infusoria, vinegar eels, and powdered fry food. We recommend that they reach 2 weeks of age to be able to eat live baby salt shrimp. This is a highly nutritious food and we highly recommend it. Veteran breeders recommend small meals, multiple times per day, and daily water changes to ensure that fry are able to eat enough without having to waste water from rotting leftovers.

We hope you get a chance to enjoy this hardy and colorful beginner fish in a planted aquarium. If you are intrigued by the fascinating world of gouramis, check out our article on the Top 5 Peaceful Gouramis for a Community Tank.